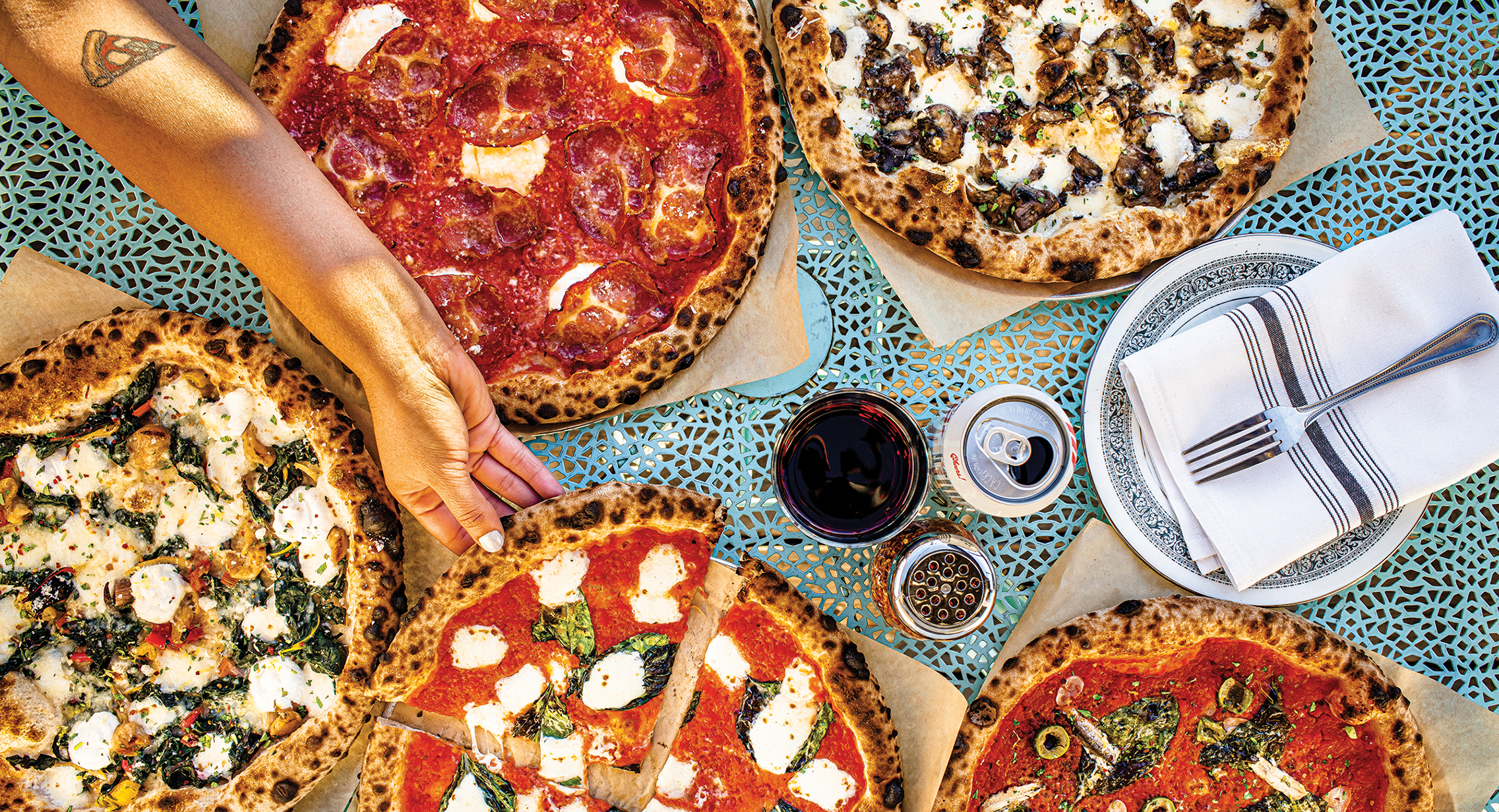 Our guide to Austin’s best pizza

To showcase the best of Texas-grown grains, pastry chef Abby Love works like a flour-obsessed mad scientist, combining nutty Yecora Rojo and other flours from neighboring Barton Springs Mill on an array of Neapolitan-style pizzas. The result? A fluffier wood-fired pie that’s the perfect canvas for the palate of pizza maker (and Bufalina dough veteran) Cody Hendricks. Think accessories like homemade sausages from Three Six General Butcher and an indulgent carrot curry that Love describes as “the best curry naan you’ve ever had.”

In 2011, when chef Shawn Cirkiel rolled a dome-shaped pizza oven into the back space of (you guessed it) his popular gastropub, Parkside, Austin wasn’t exactly awash in pizzas on fire quality wood. In fact, this lark preceded a Neapolitan wave which is just beginning to recede today. Nevertheless, it is still a standard bearer of the form with a leavened pre-ferment that has been used in the Cirkiel family for 15 years. These just-charred pies use shiny plum tomatoes to highlight an array of toppings, including homemade fennel sausage and a runny egg (which can top any pie on demand).

Vegan pizza maker Rob Lordi says his secret to plant-based pies — loved by vegans and omnivores alike — are Nonna’s thoughtful homemade toppings. For example, a melty “mozzarella” base of pumpkin seeds, which gets its mild flavor through a culture of homemade soymilk. From there, Lordi’s New York-style pies and Sicilian square slices are dressed in hearty wheat gluten sausages, maple-infused tempeh, and beet “pepperoni” that’s spiced with smoked paprika, pepper and fennel to skilfully replicate the original.

The making of a modern pizzeria

Before opening the original Bufalina in 2013, owner Steven Dilley admits his only real restaurant experience was working in a Subway while in college. Consider the friends in the industry who told him how risky it was to open his own store, and it’s a small miracle he ever took off. But that decision by the self-taught pizza maker proved pivotal, as Bufalina ushered in a groundswell that took Austin from pizza desert to oasis, with examples like his Puttanesca with Bianco DiNapoli tomatoes, capers, olives and fennel leaves.

Chef Tony Curet may be using an 800-pound Four Grand-Mère brick oven—and the resulting pizza crust no doubt has that fluffy trademark—but it would be almost criminal to classify his pies as “Neopolitan.” “. Doubling down on heat, smoke and culinary sass, Curet taps into something all his own. Credit his time in New Mexico or perhaps his dining experience in New York, but each pizza creation — like the Italian Vato with Berkshire salami and Hatch green chiles — is a singular experience.

With its vintage Mets memorabilia and Tiffany-style stained glass windows, Favorite Pizza doesn’t just look like a New York family spot, it tastes like one too. Inspired by everything from ’80s mall pizzerias to Big Apple icons like Scarr’s Pizza, co-owner Larry McGuire and chef Nicholas Ford set to work sourcing the best ingredients to achieve that elusive feeling of ” authenticity”: crushed tomatoes from San Marzano, a mix of mozzarella and toppings like sausages and meatballs made at his nearby restaurant, Sammie’s.

The ultimate breakdown of the biggest pizza styles in town

With pizza toppings like Spanish boquerones, mushrooms sautéed in black truffle shavings and even barbecue-brand spicy pickles, it’s obvious founder Clint Elmore isn’t afraid of bold flavors. But don’t be fooled by fanciful flights; there is a real know-how behind each eclectic Neapolitan creation. Formed in Naples, Elmore begins with a dough forged from Italian Caputo flour that undergoes a novel (and painstaking) four-day fermentation process that imbues a tart hue on every airy slice.

As an editor at Austin Chronicle, Jen Scoville Strickland has always had a deep knowledge of opening something “New York style”. Inevitably, she would be the first person in line, and without fail, she would always come away disappointed. So the Western New York native took matters into her own hands, first performing at Angelo’s Pizza in New Jersey, then opening her own pizzeria with her husband, Joseph, and friend Terri Hannifin. Now the trio are the undisputed kings of style, as their crisp, pliable slices have defined Southern Congressional cuisine for nearly two decades.

Given the criminal lack of solid New Jersey-style pizzerias in the city, Tony Villani’s Crestview spot deserves its hidden gem status…and more. Like an archetypal slice of New York-style, this 29-year-old restaurant’s gleaming and sturdy pieces are best enjoyed on the go. But what sets her pizza apart is simple: a two-inch stone hearth on which pies develop thin, cracked crusts, with each bite delivering a crispy symphony of textures and flavors.

Ryan McElroy likens running a pizzeria to owning a professional sports team, where you have to meet fan expectations while trying to break new ground. For one thing, he jokes, “try not to have pepperoni on the menu.” But he and executive chef Russell Victorioso find plenty of crowd-pleasing opportunities to forge their own path, including a Neapolitan/New York-style hybrid pizza that has a crispy base backed by a puffy cornicione (or rim) and seasonal iterations like one with chorizo ​​verde, Oaxaca queso, and pickled corn.

Owners of one of only three VPN-certified restaurants (Verace Pizza Napoletana) in Texas, Josh and Paige Kaner produce the only true Neapolitan pizza in town. But the history of their menu dates back to 1998, when the couple took a trip to Napa Valley in California. It was there that the Kaners harvested a strain of wild yeast from wine grapes that became the basis of their pizza today. The husband and wife team credit this sourdough flavor with defining everything from a stripped-down marinara pie to ones adorned with rapini and Parma prosciutto.

Do not ring too biased, but marketing manager Rob Larry says pizza is the perfect pairing with beer. And not just any beer, but the type of hazy, hop-forward beers the growing brewery has become famous for (i.e., Electric Jellyfish). This consideration of how pint and pizza play together goes beyond the compatibility of carbs and Simcoe hops. Even toppings like his sausage from Smokey Denmark are made with beer brewed on site, so every bite sings in frothy harmony.

How Via 313 created a phenomenon the size of Detroit

While others turned to baking bread at the start of the pandemic, Issac Flores built a pizza oven in his backyard and got to work recreating the kind of wood-fired pies he’s become fond of. delivered when he lived in Brooklyn. Through YouTube tutorials and watching Frank Pinello and Anthony Falco on Vice, Flores got good enough to open an outstanding food trailer specializing in this area. other type of New York pizza. Think of the lightly charred, wood-fired examples seen at The Pizzeria Industry in Brooklyn, not the 99-cent slices straight out of a deck oven in Times Square.

If an elementary school pizza night collided with a chef-curated casual dining approach, Swift Pizza Co. would be the unlikely outcome. In a playful atmosphere with Lego decor and cocktail options accented with Pop Rocks, Chef Victor Santos delivers some truly exceptional pizzas. Whether he’s making meatballs from beef raised on owner Adam Jacoby’s family ranch, using chunks of carnitas from Grizzelda, or enhancing prosaic pepperoni with that of Salumeria Biellese, the approach of Swift isn’t child’s play, though it’s just as fun.